The store will not work correctly in the case when cookies are disabled.
Need help? call 972-617-7056

Only 1 left
$349.97 $499.95
Wish List
Failure to accurately describe your trade(s) in regards to condition, missing parts, actual make/model and or features could result in us returning your trade(s) to you or could result in a different offer. Our offer is pending arrival and inspection of your item(s).
Stolen U.S. Government property will be reported to the F.B.I. We serial number trace all NSN items as we do not want to resell stolen U.S. Government property to our customers as it is illegal and will result in the forfeit of the stolen goods. If you do not know what you have contact the manufacturer and ask them if it is U.S. Government property prior to sending it to us as we cannot send it back to you once it is identified as stolen.
Trade request submitted
Please upload valid image
Skip to the end of the images gallery 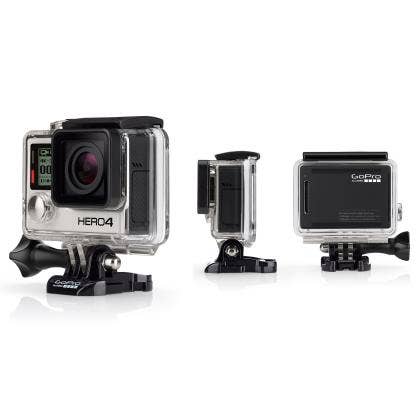 Skip to the beginning of the images gallery
Details

Capturing 4K Ultra HD video and liquid-smooth slow motion at up to 240 frames per second, HERO4 Black delivers higher performance than any other GoPro.

Most advanced GoPro ever.

HERO4 Black takes Emmy® Award-winning GoPro performance to the next level with our best image quality yet, plus a 2x more powerful processor that delivers super slow motion at 240 frames per second. Incredible high-resolution 4K30 and 2.7K60 video combines with 1080p120 and 720p240 slow motion to enable stunning, immersive footage of you and your world. Protune™ settings for both photos and video unlock manual control of Color, ISO Limit, Exposure and more. Waterproof to 131’ (40m) with 12MP photos at 30 frames per second and improved audio, HERO4 Black is the ultimate life-capture solution for those who demand the best.

With 12MP Burst photos at a blistering 30 frames per second, HERO4 Black helps you capture the moments you don’t want to miss. Capture single photos, or choose Time Lapse mode to shoot photos automatically at set time intervals from 0.5 to 60 seconds—great for gear-mounted shots when the shutter button is out of reach.

New settings for after dark.

HERO4 Black features built-in Wi-Fi and Bluetooth, allowing you to connect to the GoPro App, Smart Remote and more. The GoPro App transforms your phone or tablet into a live video remote for your camera, offering full control of all functions and settings, easy shot preview and playback, plus sharing via text, email, Facebook and more. The Smart Remote allows you to control multiple GoPro cameras from distances of up to 600’ (180m).

HiLight Tag enables you to mark key moments while recording so you can quickly locate your best clips later for convenient playback, editing or sharing using the GoPro App or GoPro Studio. Just press the dedicated button on the camera or Smart Remote to add a HiLight Tag. You can also use the GoPro App to tag your highlights.

HERO4 Black features SuperView™, a GoPro-exclusive video mode that captures the world’s most immersive wide-angle perspective. It allows you to capture more of yourself and your surroundings in the shot—resulting in captivating, ultra engaging footage of every adventure.

Love the Time Lapse videos you’ve seen on the GoPro Channel? Now you can easily create one yourself—without spending hours in the editing room. In Time Lapse Video mode, the camera captures a Time Lapse video automatically. It’s a great way to showcase a sunrise, road trip or family gathering as a short, shareable video.

Let the camera do the thinking for you. Auto Low Light mode intelligently changes frame rates based on lighting conditions for optimal low-light performance, enabling you to move between bright and dark environments without having to adjust your camera settings.

Be ready to capture the moment at a moment’s notice with new QuikCapture mode. It turns your GoPro into a one-button camera, allowing you to power on and start recording automatically with the press of a single button. Press once to record video, press and hold for 2 seconds to capture Time Lapse photos. Never worry again about missing an epic shot.

Expand your GoPro experience with the free GoPro App and GoPro Studio software. The GoPro App allows you to control your camera remotely using your phone or tablet, view and share your content and watch “best of” videos on the GoPro Channel. Use GoPro Studio to create your own engaging GoPro-style videos to share with the world.

Reviews
Write Your Own Review
Only registered users can write reviews. Please Sign in or create an account
To Top